Western Construction, Inc. was founded in 1949 by Milton "Mitzie" Chazin.

The business model Mitzie developed for Western was very simple and straight forward, Give People What They Want and Don't Charge To Much!

Milt's son Bradley Chazin is now president of Western Construction, Inc. Brad's first experience with Western was at eight years old. Milt would bring him to the garage construction sites so he could could do a thorough clean up. His pay for each garage he cleaned up was a quarter (yes, I said a quarter).

Brad's work ethic was the opposite of nepotism; Milt always had Brad work a little harder for less money then the other employees. It was a great learning experience that Brad tries to teach the next generation.

Western Construction, Inc.'s team consists of both employees and trade partners. Our trade partners are not simply subcontractors, but people with whom our company has had a long and mutually loyal relationship. Many have been with Western 10, 20, 30, and even 40 years. We know the people we send to work on your project, and we know they’re the best in the business.

A great example of this is Donald "Cowboy" Dudeck who moved from his family farm in Browerville, Minnesota, to the big city (St Paul) and started pouring garage slabs for Western Construction, Inc. at the tender age of 25. This year he celebrates his 45th year with the company. He credits his family farm background as providing the lessons that led to his great work ethic.

Another great example of Western's dedicated employee's is Dennis Moss. Dennis has been building garages for Western Construction, Inc. since 1974. He has the unusual honor of being the only employee to have fired his boss’s son. One season, Brad wanted to put down his pen and put on a tool belt and try his hand at building garages. It wasn’t that he didn’t like working in the office; he just wanted to learn from the best garage carpenter in the Twin Cities. After having Brad on his crew for a couple of days, though, Dennis told Brad to hang up his tool belt and stick to his pen. (We told you the company has high standards.) 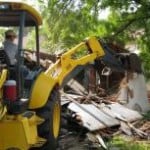 The best trade partners in the business start with the Doyle family. When it comes to tearing down your old garage or digging a full basement foundation on a narrow city lot with your neighbor watching, nobody does it better than Gary Doyle in St. Paul or Vern Hubbell in Minneapolis. Vern has been removing garages for Western since 1975 and Gary since 1980. In fact, Gary is the third generation of his family to be a Western trade partner. His father, John Doyle and grand father Chance Doyle, did tear downs for Western before that.

John, from Amp Electric, has been Western’s #1 garage electrician since 1974. Past customers will call years after their project is complete and ask for John’s number. They all comment about how respectful he is while working in their home.