In 1974 there was s sign that hung on the wall in the principal’s office at the St Louis Park High School (so I was told) that read;

The true character of a man is based on what he would do if he would not be found out. 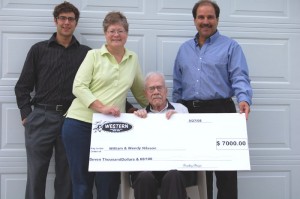 I've often thought about that sign and recently I had a chance to apply it first hand.

We built a detached garage in South Minneapolis. The owner was a elderly man who had numerous health issues so his daughter moved in to take care of him. They now needed a two car garage and after many years of procrastanation they decided to build their dream garage

Six weeks later we finished their garage and of course they couldn’t have been happier (they were Western Garage customers after all!). They were so happy they paid for the garage before we had a chance to bill them.

Several months later as I was balancing the books and noticed a $7,000 discrepancy. The good news was I had $7,000 more than I thought I should have. However, everything needs to tie out so after hours of going over several months of bank statements I discovered the error.

Those wonderful people in South Minneapolis with their dream garage had over paid. I couldn’t believe it. In the 64 years Western Garage Builders has been building garages no one has ever overpaid nearly that much.

I thought to my self, what should I do with the extra money? I could keep it and no one would be the wiser (remember the sign) or I could do the right thing and return it. My father always taught his children to do the right thing so returning the money was the obvious choice.  And then that sign came to mind and I started laughing. My diving coach and principal Mr. Wanio would be so proud to know 40 years later his favorite student (I’d like to think so) is still thinking about that sign.

I had a 4′ replica check made up and my son and I presented it to the homeowners. They had tears in their eyes. They were so happy and appreciative that anyone, especially a contractor would return that much money. All you hear about in the media these days is about the contractor’s  that take advantage of the elderly. You never hear about the honest Minneapolis builders that protect the elderly. Western Garage Builders is definitely one of those good Minneapolis Builders.

Click here to read their Thank You Letter and to see a picture of the $7,000.00 presentation.