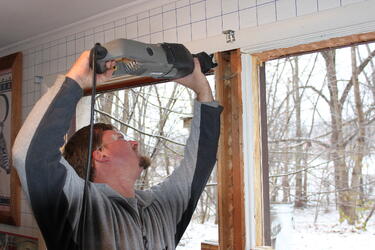 Proper replacement window installation is as important if not more important than the window itself.

When you place an order for vinyl replacement windows you want to make sure you're purchasing measured to fit windows not stock windows like you'll find at a big box retailer like Menard's, Home Depot and Lowe's.

My cousin was buying a new home in Minneapolis, MN and asked me to over see the home inspection before he put in a offer. The house was in really good shape and they had new vinyl windows so we felt the energy cost should be low.

I went over to one of the vinyl windows and felt a slight draft. I thought, this is odd because they were a name brand window and shouldn't have a draft. I tried opening and closing both the top and bottom sashes but that didn't do the trick. I felt a little give so I gave the window a little push and the entire unit almost fell out of the opening. There was only one screw holding it in place.

My cousin was more than a little upset because he really liked the home but didn't want his windows falling out. We went around and found that more than half the windows were installed poorly. In addition to improper installation they were sized incorrectly so even if I pulled them out and reinstalled them they wouldn't work properly.